Fly Fishing America in the time of COVID

As the COVID Spring turned into the COVID summer, I broke up with my partner of 18 years (unrelated to COVID) and took the moment of no responsibilities and no commitment to at least explore my old California fly fishing haunts.

I decided to visit Mike at Sugar Creek Ranch. Just getting to Sugar Creek Ranch from Sedona proved to be a challenge as the California fires were just hitting full stride. I mostly went North thru Nevada and cut over into California around Reno, NV and thought I’d start heading Northwest so I stopped in Susanville for the night. It turned out I got the last room in the entire town and only the next morning did I realize why. There were fires everywhere and the town was full of firefighting rigs from near and far. When I tried to head out of town, my road to the north was closed because of a fire and I was soon to find out that was the case to the East and to the West. Three different fires, essentially leaving me only headed back South on I the road I came in on. I finally got far enough south so that I could head west and made it to the central valley on my way to Callahan, CA.

I’ve written before about the legendary Sugar Creek Ranch and its trophy trout and I’ll link to that story later.

I set out to spend a little time with Mike to help out on some projects that require two people. The days in the summer can get quite hot there so our routine was getting projects handled in the morning, resting in the afternoon, and fishing or just hanging out in the evening.

Our social distancing was easy as it was only Mike and me at the ranch and the nearest town is ten miles away.

I have mentioned previously that one of the great learnings at Sugar Creek is how to hook and land really large trout. You get enough opportunities to catch 25 inch plus rainbows that you will eventually get good at playing and landing them where in other places you might only get one shot at a fish that big. You also get schooled in refusals as you watch large rainbows head to your fly only to refuse it at the very last moment. When a 25-inch rainbow comes from below and pushes your fly up with a huge bump of water, I guarantee that your heart will skip a beat. The other lesson is when you get to watch a large fish coming slowly at your fly with its mouth open and its everything you can do to not set the hook too early or to watch him refuse the fly by just shifting his head slightly to one side or the other with what would, in fast water, look like he missed the fly. Only now you quickly learn that when you have said in the past that the fish missed the fly, you were only kidding yourself. Trout are fast and picky. Missing a fly is not something that occurs very often, maybe never. 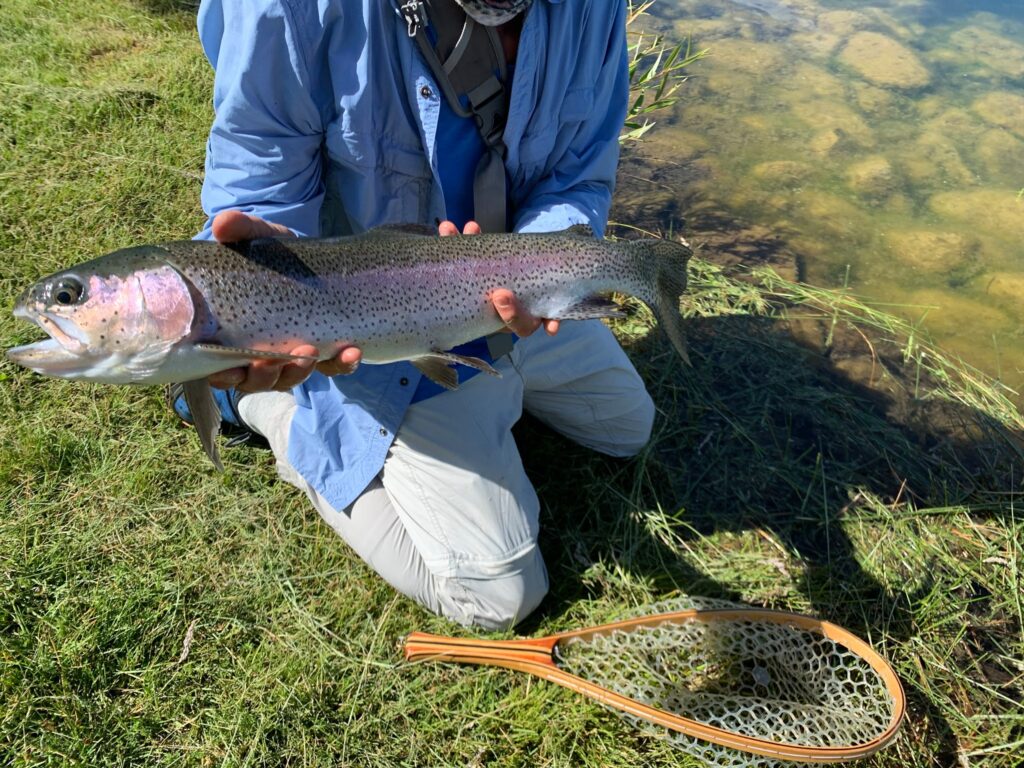 I never tire of hunting these big trophy trout but as the summer started to wind down I realized that with my newfound freedom, heading off to explore some of my other favorite spots was not just possible but tempting. Little did I know that this would turn into the trip of a lifetime crossing America during one of the most memorable years ever!

I’m not sure where it turned into this cross-country odyssey but probably pretty early on as I headed North into Oregon.

I have always loved the Metolius River and it seemed like the next obvious spot as I headed east out of Ashland, OR. I got to Sister’s OR and realized it was full-on summer and many folks were on the road causing me to question what I was doing in such a high season beauty spot but here is where the beginning of my astounding luck took hold.

I headed off to the edge of the Metolius River and explored the campsites near the river and found several that were nearly empty. This made no sense till I saw the white soot in the air from a huge fire not too far away. It turned out that the campsites were actually all booked up but most folks, when checking the fire conditions, decided not to come, leaving the campsites nearly empty. In fact, the tent campsite I pulled into was completely empty and I had my choice of campsites so I settled into one that allowed my tent to be all of 40 feet from the river bank in a beautiful pine forest.

The Metolius is exactly my kind of river being wadable in most of it, full of beautiful fish, and a stunningly beautiful setting. Did I also mention that the weather was perfect every day.

I did see some other fishermen but social distancing is only polite while fly fishing so this was a very fitting way to travel in the COVID summer of 2020. As I stepped into the river I noticed a portly gentlemen down at the next bend, casting into a nice pool. Fifty years of fly fishing with some of the best has made me rather quick to judge whether I’m looking at a good fisherman or a novice. This guy was not a novice and I appreciated watching his smooth and polished casting. Hours later when I came out of the stream and was headed back to my campsite, I ran into him by his van parked by the edge of the stream. He was a bit heavy and sported a long white beard. His name was Grizzly! A bit of conversation showed me that he was every bit the fly fishing vagabond that I was that summer. He had gotten there from Virginia and was working his way back to the East again. That smooth casting that I had observed was partly because of the beautiful bamboo rod he was carrying that he had built himself. We shared stories and mutual friends and decided that we would keep in touch. He was headed to the east side of Oregon to the Owyhee river which turned out to be one of my next destinations.

That evening it started turning a little cold and as I got back to my tent it was getting dark already. The only other folks in the campground were three young guys who had already started a roaring fire so I headed there to say hi and warm up a bit before turning in. They quickly offered me a beer and I explained to them that although I was from Wisconsin originally, I really didn’t drink beer. After a bit of insistence, I proffered that usually about this time of year I visited Wisconsin and I would have what my Wisconsin friends referred to as my “first annual beer”. It was actually pretty tasty with a rather fruity hint that I later discovered was a pineapple pale ale. Not wanting to get drunk, and it getting pretty dark, I poured out the last of it on the ground next to me. They insisted on me having another and not having had any alcohol for years, I got fairly drunk. Unlike me, they were pretty serious drinkers and brought with them four large coolers of beer for the three of the for three days! One of them fell off his chair part way into the evening but I kept talking with the one coherent one of them and he gave me some great information about the Owyhee river and just where to fish on it as they were college buddies and grew up in Idaho but not far from the Owyhee and had fished it a lot. In my drunken stupor, I headed off to my tent. My walking was stilted enough that one of the guys, drunk as he was, got up to make sure I made it to my tent.

About the Author: admin